Ford Madox Brown was a founder member of Morris, Marshall, Faulkner and Co. and worked on both stained glass and furniture designs.

He was not a member of the Pre-Raphaelite Brotherhood. He was older than the group. However he was an influential figure for the pre-Raphaelites. Brown was born in Calais the son of a ship’s purser, and all of his art studies took place on the Continent. He studied in the Antwerp Academy under Baron Wappers. In 1844 he came to England with his wife and daughter Lucy; who was later to marry William Michael Rossetti. He continued to visit the Continent, and in particular Italy, where he met and was impressed by Nazarenes. 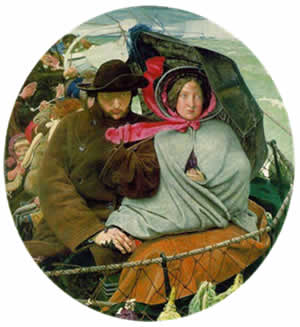 Rossetti wanted to become an apprentice to Ford Madox Brown and wrote to him an effusive letter. Madox Brown felt he was being made a fool of, found a large stick, and went to seek the younger man with violence in mind. On their meeting, however, Madox Brown was convinced of the enthusiasm of Rossetti, and became his tutor and lifelong friend.

Madox Brown sympathised closely with the Pre-Raphaelites, although he was never formally one of the brotherhood.

“Strictly speaking, I was not one of them. I was somewhat older than them at the time, and I disavowed certain of their tenets. Before meeting them I had already in Paris resolved on a system of individualised and truer light and shade… about this time also I had an attraction towards Holbein, after being once chiefly swayed by Rembrandt. On my meeting the Pre-Raphaelites, I shared their feeling for intense and brilliant colour.” Ford Madox Brown

Many of Madox Brown’s pictures may be fairly classed as Pre-Raphaelite. His most famous picture in the social realist tradition is Work. The Pretty Baa Lambs, however is a typical Pre-Raphaelite out-of-doors study of light effects. The best collection of his paintings is that at Manchester Art Gallery and in Manchester Town Hall but there are also a number of works in the Tate.

Madox Brown was a founder member of Morris, Marshall, Faulkner and Co, for which he designed furniture and stained glass windows. He was also the inspiration behind the first Arts and Crafts exhibition. Brown was never the most wildly popular of painters, but was reasonably successful, and in 1878 was commissioned to do the large murals for Manchester Town Hall, a project he just lived to complete.

In time, he achieved financial security and his house in Fitroy Square became a rendezvous for artists and writers later recalled by his grandson and biographer Ford Madox Ford.