Present day 1 Cannon Hill sits on a plot that has, for at least the last 250 years, had buildings associated with the nearby Arnos Grove Mansion (now Southgate Nursing Home). The 1801 Edmonton Enclosure Map indicated an outbuilding of the Walker estate. Later maps showed slight changes to the size of that building. A 1926 photograph indicates that this is where the hay barn for Arnos Grove once stood, complete with the bell tower from the Weld Chapel. It was situated next to the Rose Garden for Arnos Grove and the outer wall of that Garden remains a party wall today. The hay barn was demolished when the Arnos Grove Estate was disposed of for housing in 1928. 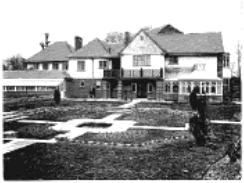 Herbert Charles Keene, a local builder and developer, built 1 Cannon Hill as his personal residence in 1929. A man of means, with gentlemanly interests of motorcars, billiards and tennis, the decoration and layout of the house and garden reflected his status. The house was built in an innovative ‘butterfly’ or ‘double suntrap’ design that was used to great effect by late Victorian architects in country homes. The butterfly plan maximised an important feature of setting, and in the case of 1 Cannon Hill, allowed the house to benefit from its prominent corner position across from Broomfield Park.

The turn of the century examples of houses built with this plan all show rooms radiating at different angles from the main wings; and such rooms, or collection of rooms often housed the domestic staff. 1 Cannon Hill,although built during the time when domestic service was dying out, had an internal layout that included such accommodation. The butterfly plan, infinitely versatile, was adapted to keep pace with the current trends in motorcar ownership by including an integral garage with a billiards room above.

Internally, the house was built with a high standard of craftsmanship; it also reflects the 1920’s preoccupation with the past in the plasterwork in the dining and drawing rooms.

As with many other houses around the same time on Cannon Hill and The Green, the public rooms are wood-panelled. The staircase appears a modified or very local interpretation of the ‘Arts and Crafts’ movement.