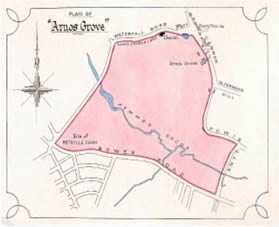 Southgate Green and the surrounding areas could look very different from the way they look today if Southgate Urban District Council had accepted the plans submitted by the Arnos Grove Estate owner, Lord Inverforth, in the 1920’s. Imagine what the area would look like without Arnos Park. Or consider the Minchenden Estate with narrower roads and a density of two or three times its present level. Cannon Hill, The Green and Waterfall Road roundabout could be shops with flats above, similar to those along Betstyle Circus now. Minchenden Oak would be only symbol on badges, the real one having been dynamited with hundreds of other mature trees felled during the development of the estate. Arnos Grove Mansion(now Southgate Nursing Home and Lulworth Court) would only be available to view on postcards. Of course, that never happened and today’s residents around the Green can be thankful that the Southgate Council and planning officials of that time acted with a respect for the ‘soul’ of Southgate, and doggedly persevered with the public interest in restraining the owner’s ambitions.

The Estate at that time comprised more than 240 acres, including land west of Powys Lane and Cannon Hill, down Waterfall Road and across Bowes Road. Inverforth had purchased it 1919 from the Walker family and as early as 1922, Town Planning minutes of the Southgate Urban District Council record discussions with his surveyors, solicitors and planners for the creation of a modern suburb west and south of Southgate Green. The estate was vast, and whilst officials knew that they would not be able to save a great deal of it for open space, they did secure Arnos Grove Park and Minchenden Oak for public use, and concluded further agreements as to developments affecting the surroundings of The Green.

The disposal of the Arnos Grove Estate was of particular importance to Southgate Green. It was the largest tract of land possessed by one owner facing the Green and its development would impact on the surroundings of the Green itself. The draining of Duchess Pond in 1925 had removed a public amenity from the area, and residents were keen to see that the charm of the area was not further diminished. Half of the pond was in the Arnos Grove Estate (now the top of Arnos Grove and leading to the top of Minchenden Crescent) and when it was filled in, the council tried to secure from Inverforth an undertaking that the area would not be built on. Inverforth kept his promise, but only to a degree by making his side of the pond the roads which now traverse the Green itself.

Serious discussions regarding Arnos Grove Park began in 1923 with Inverforth not giving consideration to any land at all being dedicated to public use. The Council’s demand of 44 acres was, in his view, excessive. He then offered a narrow strip along Pymmes Brook; but only if the council undertook to pay for its redirection, various bridges and other engineering works. Officials who argued that the cost for such a small tract of land would be unjustifiable promptly rejected this. In 1926, he offered the land to the council at £1000 per acre. The council responded that ‘the sum named is so much higher than the amount which the council are advised is the value of the land that it forms no basis for negotiation’. The amount of land reserved for parkland, the layout of surrounding roads and the density of the 729 houses planned for the north side of the park soon became a matter for the Ministry of Health (responsible for housing matters at that time) after Inverforth complained that the Council were causing ‘unnecessary delay’ in considering his proposals. He had proposed a density of 14 houses to the acre when the Town Plan was 6. He wanted a road straight through Arnos Grove Park to connect Arnos Grove with Bowes Road.

In January 1927, the Council held a meeting, excluding the press, to discuss those matters. The Clerk reported that the Council had agreed to shopping centres at Betstyle Circus and Bowes Road, but not Cannon Hill nor the northwest corner of the estate at Waterfall Road (now Waterfall Road roundabout). The Clerk had received adverse correspondence from the Surveyor of Lord Inverforth and in response, had sent him a copy of the Southgate Town Planning (Interim Development) Order 1925 (today’s equivalent of the Unitary Development Plan). In February 1927, the council accepted an offer for ‘high class dwellings’ replacing the shops on Cannon Hill but other points remained unresolved.The Ministry of Health convened a special conference in March 1927 to deal with the disputed matters. The chief point of discussion was the road the owner wanted to put through Arnos Park. He claimed that since a subsidiary of the Underground had already purchased the land on Bowes Road, future residents would be inconvenienced if a road were not allowed. Inverforth’s surveyor also made repeated objections to the density restrictions. The officials of the Ministry said there could be no revision of the density, and that the mere assumption that a railway station might at some time in the future be built did not mean that the proposed layout should necessarily be altered.

The Ministry ‘s Town Planning expert criticised other aspects of Inverforth’s Town Plan but agreed to confer between the parties on those disputed matters. From that point onwards, discussions on the disposal of the estate and the details for agreement progressed rapidly. Agreement on Southgate Green and the fate of Cannon Hill soon followed. Whilst the Council had been negotiating with the Estate’s surveyors, residents around The Green experienced the initial changes of status from rural to suburban community. Hoardings which advertised the impending changes sent alarm bells ringing through the community. At that time, numerous signs had appeared all over the estate walls (which were 12 feet high surrounding the estate) claiming that land was available for development as ‘flats or shops’. Such notice boards erected around the Green were seen as a ‘death sentence’ for The Green. The filling in of Duchess Pond and prominent hoardings underlined to local residents that the charm of The Green was being compromised.

The discontented held a public meeting in May 1927. Residents protested against the apparent lack of will to preserve the Green and its surroundings and pleaded with the council to not sit idly by and watch ‘the soul of Southgate disappear or be lessened in beauty’. What was the council doing about preserving Arnos Grove Mansion from demolition? Comments in the Palmers Green and Southgate Gazette show the intensity of feeling that development around The Green had provoked. The Green, it was argued, would always be there but, ‘if houses, flats and shops surrounded it on the outskirts of Arnos Grove, the Green would not be the same’. Council officials responded that they had refused shops for that reason and that they were ‘striving to not only preserve the beauty of the Green surroundings and the trees, but something beyond that.’

Aware that the development of Cannon Hill and the perimeter of the Estate affected The Green, council officials negotiated the layout and density of what exists there today. Only a handful of houses were allowed on spacious plots. The Council rejected proposals for a private road set back from Cannon Hill and fought to have the frontages on the houses increased from the miserly 10 feet initially proposed, to 40 feet. Arnos Grove Mansion was not demolished and the footpaths along the Green were preserved. Inverforth was required to give up 20% of the land in one form or another for public use – a figure lower than other estate owners whose land was compulsorily purchased. However, the council paid a higher price per acre than for similar open spaces, but not the £1000 per acre originally requested. A road did not divide Arnos Park, nor was it renamed Inverforth Park. But Arnos Grove was built crossing the Green and interfering with the unity of space that had previously characterised the Green. Inverforth negotiated for the council to share the costs of drainage and road building, but the council secured a wide frontage for Cannon Hill and a limited number of access openings.

Other conditions of his application were formalised in covenants. No house to be built on Cannon Hill was to be of a value less than £2000, a price two or three times the cost of houses built on the interior of the estate. The layout of some of the plots coincided with the natural boundaries of the old Rose Garden of Arnos Grove and perhaps because of deputations made by the National Trust and Council for the Protection of Rural England, some of the garden walls and parts of the estate boundary walls exist today. Whilst the Council did not secure more land for public use, and could not stop the roads extending into the Green, they had prevented its total dissolution through some tough negotiations with the Estate’s surveyors. In retrospect, the SUDC after five years of negotiating, had produced an agreement that was a compromise to both sides. It had preserved some of the Surroundings of the Green and its charm was retained, but the changes did not quite fulfil the Council’s wish to do ‘ something beyond’.