Arnos Grove, (now the Beaumont Care Centre) Southgate was the home of the Walker family from 1777 to 1918 for four generations of the family. By 1900 they and the Taylors owned some 600 acres of Southgate and Palmers Green, most of which is now built over by our homes, gardens and the parks.

Isaac Walker (1725 -1804), a prospering linen merchant and member of the Society of Friends at Winchmore Hill bought Arnos Grove in 1777. In bad winters Isaac would buy food cheaply in order to sell it even more cheaply to the poor. Isaac Walker I suffered badly from gout and often spent time in Bath “taking the waters” in true 18th century style. Gout was an illness that plagued many members of the family through the four generations. 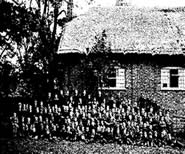 Isaac’s son John Walker (1766-1824) became interested in education and opened a charity school in 1812 on the Walker estate at the bend of Powys Lane with the aim of teaching “the local peasantry reading, writing and arithmetic”. It was probably run on the monitorial system whereby the teacher taught ten children and each “monitor” had to teach the lesson to another ten.

The other land owning family, the Taylors of Grovelands were also Quakers and the two families intermarried and became the Taylor Walker Brewery Company. John Walker was a member of the Royal Society, and corresponded with many famous scientists of the 18th and early 19th century. He loved the gardens and plants at Arnos Grove and had plants and trees imported from around the world for the Arnos Grove grounds. He took long walks along the New River and Pymmes Brook which flowed through his estate. 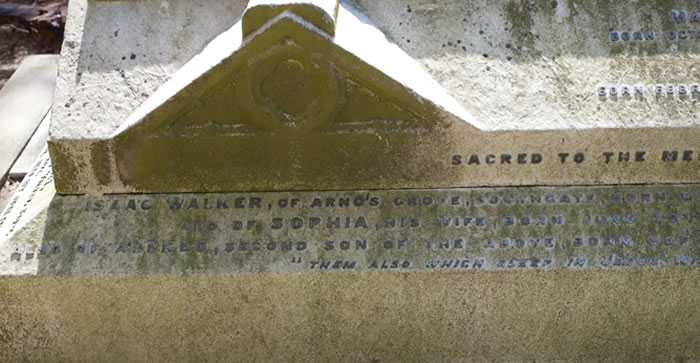 Isaac died in an epileptic coma attended only by a maid. But there were his 12 children: – the 7 unmarried cricketers and his 5 married daughters. They were now Anglican and paid most of the costs of building Christ Church. 50 years later they gave the land and built St. Johns.

Isaac’s eldest son, another John (1826-1885), made the cricket ground for the people of Southgate. All 7 brothers played cricket at every opportunity and one of the fields was “rolled and pounded” to make a cricket ground, “better than Lords” said many. John spent large sums on making the cricket ground at Southgate and in arranging matches for the great teams of the day. He also set the MCC and Middlesex CC on a sound financial basis. John was on the committee of the MCC and Surrey Clubs and was vice President of Middlesex Cricket Club from its formation in 1864 until his death. The Walkers paid all the expenses for the MCC grounds at Lords, so it was not necessary to pay a subscription to attend matches. All the famous cricketers of the mid to late 19th Century stayed at Arnos Grove and praised the hospitality they received. There was an organ in the hall which John played on Sunday evenings while his brother Russell gave out hymn books. John’s cricket bat can still be seen in the pavilion to this day. 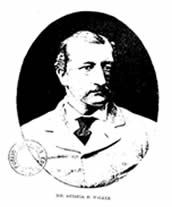 John Walker was appointed the leader of Southgate’s first local Council.
Vyell Edward Walker, (Teddy) (1826-1906) was named as the best all round cricketer until Dr. W.G. Grace. He was loved and honoured by all who knew him and was an excellent fair minded even-tempered captain yet ready to take advantage of any opponent’s weakness by arranging the fielders according to the idiosyncrasies of the opposing players. However he had a sense of humour, even when his team lost or he got a duck. He took ten wickets in an innings three times. He was president of the MCC and was vice president of Middlesex for years. Teddy realised that Southgate village was growing quickly and before long there would be no ground for recreation for the public at the time when it would be most needed, so he gave several acres of pasture to the village in perpetuity as a recreation ground. He also gave the fences & gates for which he paid £600. The villagers themselves raised £250 for a pavilion with dressing rooms for the players and shelters for the spectators in inclement weather. Mr Brown said, “We could choose no better way of showing our appreciation of VE’s gift”.

They encouraged the villagers of Southgate and Arnos’ servants to play cricket and one of the Walkers generally acted as umpire in matches for village cricket or for “boys or married v single matches”. Teddy installed electricity and bathrooms in Arnos Grove at the turn of the century but this and the Liberal Government’s (1906 – 1912) new taxation measures to help the poor, meant that on his death there was a £140,000 mortgage on Arnos Grove so perhaps that is why there were no funds available for the trust he had set up to secure the cricket ground and that could be why the last brother Russell Donnithorne began the sale of the land.

They were wealthy landowners with large houses & servants, but they used their wealth generously. In the days before the Welfare State they contributed generously to almost 100 local charities. The Walker family were enormous benefactors to Southgate and Palmers Green. 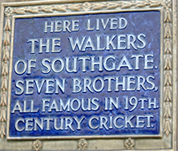