In 1834, William Morris was born in Walthamstow, Essex then a quiet village in the East of London. After successfully investing in a copper mine, in 1840 William’s father was able to purchase Woodford Hall, a large estate on the edge of Epping Forest. William enjoyed a comfortable childhood before going to Marlborough and Exeter College, Oxford.

He originally intended to take holy orders, but his reading of the social criticism of Carlyle, Kingsley and Ruskin led him to reconsider the Church and devote his life to art. At university Morris met Edward Burne-Jones with whom he formed an intimate and lifelong friendship. Later the two friends met Dante Gabriel Rosetti and became part of the The Pre-Raphaelite Brotherhood. The Brotherhood formed in 1847, saw naturalism, simplicity, and romanticism as integral to the creative output of the Late Gothic and Early Renaissance periods, before the intellectual classicism of the High Renaissance exemplified by the works of Raphael (1483-1520). The key figures in the original Brotherhood were Dante Gabriel Rossetti (1828-1882), William Holman Hunt (1827-1910), and John Millais (1829-1896).

The group were heavily influenced by the work of Ruskin and by the crafts and architecture of the Medieval period. Morris and Burne-Jones were Anglicans and for a time they talked of taking part in a “crusade and holy warfare” against the art and culture of their own time. Ruskin, of course, dismissed the artists of the 19th century as servants of the industrial age. After leaving Oxford, Morris was briefly articled to G. E. Street, the Gothic Revival architect, but he soon left, having decided briefly to become a painter. In 1857 Morris joined with Edward Burne-Jones and Dante Gabriel Rossetti to paint frescoes for the Oxford Union. He began writing poetry and in 1858 he published ‘The Defence of Guenevere and Other Poems’.

Morris married Jane Burden whose features and stature remain familiar to us as a pre-Raphaelite ideal of feminine beauty present both in paintings and in many of the images in stained glass. She was admired by Rossetti and Burne-Jones who both painted her. The marriage was not entirely happy despite two daughters and Jane had affairs including one with Rosetti. 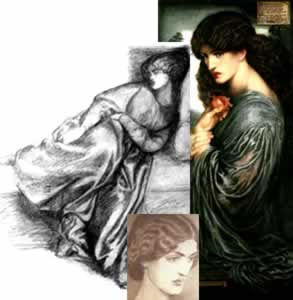 Here she is to the right as Proserpine painted by Rosetti. The drawing is also by Rosetti. According to classical mythology, Images of Jane Burden MorrisPluto, the god of the Underworld, kidnapped Proserpine to be his wife. She begged to return to Earth, but because she had eaten some pomegranate seeds, Pluto confined her in his kingdom for half of each year. Here she is shown tasting the fatal fruit.

Rossetti was obsessed with Jane 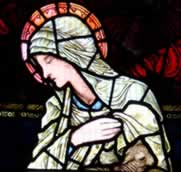 Burden Morris, the model for Proserpine. Thus for Rossetti, such images represented the ideal in sensuous, alluring female beauty. You might want to see how these images of Jane have a parallel with some of the Burne Jones and Morris collaborations on stained glass in Christ Church

By the 1860s Morris had decided that his creative future lay in the field of the decorative arts. His career as a designer began when he Detail from the Morris /Burne Jones window representing Humilitydecorated the Red House, Bexleyheath, which had been built for him by Philip Webb. The success of this venture led to the formation of Morris, Marshall, Faulkner & Co. in 1861, which produced carpets, wallpaper, carving, furnitute and tapestries. The ‘Firm’ (later renamed Morris & Co) was also well-known for its stained glass, examples of which can be seen in Christ Church.

His best known achievements as a designer were in the field of textiles and wallpapers. Designs for these were influenced by his knowledge of the medieval works held at the South Kensington Museum and his own observation of natural forms. The detail of tiles and fabrics are very noticable in the windows in Christ Church, Southgate, produced by both Morris and Burne Jones.

Burne-Jones collaborated with Morris on stained glass windows and tapestries, designed many tiles, and also drew for the books produced by the Kelmscott Press, founded by Morris in 1891. The most important book of the Press was the Kelmscott Chaucer, with typography and borders by Morris, and 87 illustrations by Burne-Jones. The William Morris Gallery in Walthamstow has a complete set of the Kelmscott Press as well as many other examples of Morris’s work.

Morris was well-known for his literature. His first volume of poetry – The Defence of Guenevere – received a mixed reception, but his reputation as a poet was established with the publication of The Earthly Paradise (1868-70). Among his other works were Icelandic and classical translations, Sigurd the Volsung, The Pilgrims of Hope, and a series of prose pieces which included A Dream of John Ball, News from Nowhere, and The Well at the World’s End.

He was also a radical social and political thinker. Morris entered national politics in 1876 as treasurer of the Eastern Question Association followed by the National Liberal League and the Radical Union. He became disillusioned with the Liberals and in 1883 joined the socialist Democratic Federation. After disagreements with the Federation’s leader, H M. Hyndman, he formed the Socialist League, and later the Hammersmith Socialist Society.

A great deal of Morris’s writing was political in intention although much of it also played on an idealisation of a utopian order in the same way that the pre-Raphaelites were inclined to idealise the medieval. News from Nowhere, for example, an Utopian fantasy, tells the story of a man who falls asleep after an evening at a Socialist League meeting. He wakes in the future to find England changed into a communist paradise where men and women are free, healthy, and equal. Money, prisons, schools and government have been abolished and the industrial squalor of England in the 1880s has disappeared. By the end of the book, the man has returned to the present, but inspired by what he has seen, is determined to work for a socialist future. 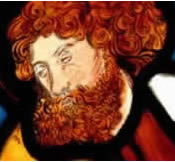 The work of Morris in Christ Church is concerned more with the medieval than the future. The windows at Christ Church were designed by the Morris ‘Firm’ over an extended period. Most are memorial windows. The representation of St.Matthew in the windows of the Lady Chapel is reputed to be a self portrait of Morris. You might like to compare it with other portraits of Morris! 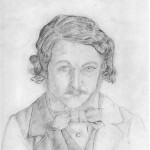 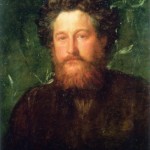 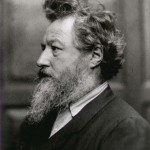