Before 1912 the Selborne Bowling Club was a weed filled paddock. The host of the Cherry Tree Inn, Bert Plumb, was apparently musing on the possibilities of the property, when an onlooker was heard to remark, ‘It ought to be good turf. I remember my grandfather playing bowls there’. When excavations were made for the laying of the present full sized Cumberland Green, ancient bowls with pips in were found in the soil. The earliest records show that an exploratory meeting took place in November 1911 between the late Bert Plumb and some of his friends with a view to forming a bowling club, on a two or three rink grass green.

The first official meeting was on February 9th 1912 and here are some of the committee decisions of that year.

‘Agreed that Mr. Butcher’s estimate be accepted for complete set of lockers in the sum of £4 12s. 0d. plus l0/ – extra for hasps, staples and padlocks. Mr. Butcher promised a thoroughly workmanlike job.’

‘Agreed groundsman’s (Mr. Glover) salary of 7/6d. per week from opening date. The opening date to be May 18th with a match, President’s team v Captain’s team.’

‘It is noted that in August of this year some members had to be written to re unpaid subscriptions-the subscription being IO/- for the season.’

‘The groundsman’s benefit reached the generous sum of 19/-‘

Finally to wind up this formation year it was agreed to hold an Annual Dinner (Ladies to be invited), tickets 3/6d. per head- concert to be provided by own members!

At the 1914 A.G.M. it was decided, in view of the outbreak of war, not to hold an Annual Dinner, but to ask Mrs. Plumb to present the prizes when the meeting terminated. At this meeting there was a “whip round” amongst those present which realized 16/- towards War Relief Funds.

During 1915 Selborne initiated special social activities for Roseneath Hospital for wounded soldiers (presumably this is the present Middlesex Hospital extension at Muswell Hill-still referred to by the locals as “Roseneath”).

During 1916 a resolution was passed in committee:

‘That any member called up under the ‘Derby Scheme’ to have 5/- of subscription refunded’.

The Ranger was congratulated on spending £3 10s. 0d. only for renovation of green-showing a saving of £1 10s. 0d. out of £5 authorized by the committee. It was then agreed that all ends of the bowling green be re-turfed at a sum not exceeding £6 (a committee of 5 was appointed to supervise the work). Mr. Plumb received permission to cut down the acacia trees surrounding the green.

In 1916 Selborne took part in a comical bowling match arranged by Wood Green Bowling Club for entertaining 500 wounded soldiers. Altogether some £800 was realised by this and other events.

‘A Mr. Bradley announced his resignation of membership and Assistant Ranger owing to the necessity of devoting all his time to his allotment in view of the extreme food shortage’.

The green was closed on Tuesdays, Wednesdays and Fridays and volunteers were requested to help with maintenance on these days during the season.

The Club agreed to hold a “meat supper” at 2/6 per head – two Humorists to be engaged at 7/6d. plus jug of beer each.

In 1919 the Hon. Secretary was advised that his application for affiliation to the English Bowling Association had been successful. In appreciation Selborne sent a cheque for ten guineas to the E.B.A. for their St. Dunstan’s Fund.

Spring of 1920 saw the Club in financial difficulties – for an emergency meeting was called at which the Treasurer reported that club funds were down to 11/9d. After a very lengthy discussion (presumably fruitless) the meeting was adjourned. Later, in September 1920 things had improved “For by kind donations, etc., the balance now stood at £25 Os. 2d. Members of the Old Southgate Skittle Club had offered to hand over their profits to Selborne to help things along. At the following A.G.M. the subscription was increased to £1 10s. with a levy of 5/- imposed on all club members to help deficiency in club funds. Lastly the Treasurer reported balance in hand of £14 3s. 5d. with liabilities of £23 leaving a deficit of £8 16s. 7d! 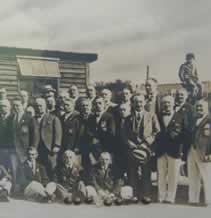 ‘That ladies do not play on the Selborne green now or at any future time.’

‘No Sunday play to be allowed’.

Members of the bowling club at the opening of the new green in 1927The A.G.M. of 1924 was a troublesome affair for it is noted that the President, Secretary, Treasurer and Captain all resigned en bloc. Mr. Charles Gafford took over the office of Secretary.

In January 1927 it was reported that the new green had been badly damaged by stray dogs. Agreed that a fence be erected forthwith.

1927 – Bert Plumb stated that the whole of the new building adjoining the green would be available as a Club House for the full and unrestricted use of the members.

About this time the Hon. Secretary was directed to inform the “Greenman” that drinks were no longer to be served on the green. Arrangements were made to compensate him for loss of tips.

1938 – A Ladies’ Day was arranged-a highly successful innovation, for some 51 ladies attended. 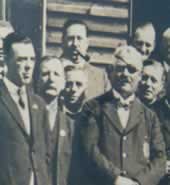 From a photograph of the members in 1927The shadow of war quickly cast a cloud over Club activities, especially towards the end of the season when all clubs received notification from the E.B.A.-L. & S.C.B.A. and Middlesex County that all dinners and meetings were to be cancelled. Selborne likewise cancelled their own Dinner and Whist Drive arrangements.

An example of topical humour at Selborne during May 1940:

‘During tea interval on Saturday the conversation naturally turned to the recent German invasion of Holland and Belgium, many suggestions being offered as to a fitting punishment for those concerned. One member, who enquired what should be done if, for instance, enemy parachutists suddenly dropped on Selborne green, drew a witty retort from Tom Brown. He suggested they be made to play on No. 3 rink . . . this met with the full approval of those players who had that afternoon been baffled by the intricacies of the offending rink.’

By 1942 Selborne had applied for and received a club “Ration Quota” and it was agreed that “Toby” and “Bing” take charge of catering . . . the Club advancing them a float of £5 for the various purchases. From this time onwards until after the war the members’ wives did yeoman service on the tea rota-despite many inconveniences, they helped to keep the club together.

Maintaining the green was already a great problem and a band of volunteers including the above two members cut, rolled and fertilized under the very able direction of Graham Williams, and, of course, Bert Plumb.

A TRAGEDY FOR SELBORNE

Once again Selborne faced a major crisis, this time with the untimely death of Bert Plumb . . . this was followed by a further tragedy one month later, namely the death of Mrs. Bert (Jessie) Plumb, his devoted wife and great friend of Selborne.

Hastily an Emergency Meeting took place at Graham Williams’s home – this being interrupted several times by air raids, and on one or more occasions the Committee members present took shelter under his dining table. It was agreed to seek an early meeting with the Brewers to determine Selborne’s future-this task being delegated to Graham Williams and Reg Shaw. Later these members reported on their meeting with Messrs. Taylor, Walker. It was learned that the tenancy of “The Cherry Tree” had been transferred to Mr. James Plumb (Bert Plumb’s brother) and to the daughter Miss Joan Plumb. For the moment affairs were adjourned sine die.

During this eventful year Selborne raised some £100 for the Red Cross Fund-“by one means or another”, and very largely due to the inspiration and efforts of Captain Dan Stevens. In the following year this sum was increased to the grand total of E225.

With the restrictions on outside competitions the Southgate Council promoted a “Holidays at Home” Bowls Competition-no entrance fees or prizes. This was a great success in which Selborne had their fair share of wins.

The following season, 1944, was a fairly “disturbed” one, for all matches were cancelled owing to flying bombs and later it was felt unwise to hold the Club Supper and prize distribution owing to the danger of bombs and rockets.

In the late spring it was obvious that the war was entering its final stages, and a meeting was called to make preparations for a supply of bunting to be ordered in readiness for the cessation of hostilities in Europe. Later in May a Thanksgiving Service was held on the Club Verandah and conducted by Patron Rev. George Stainsby.

This was followed by a hastily arranged Victory Triples, and the same evening Chief “Rebel” Charlie Taylor laid on an impromptu concert which will long be remembered, especially for his performance on a hired piano and the introduction of his theme song “Cherry Ripe”-later to become the theme song of the Selborne “Rebels”.

In the first post-war year it was reported that the floor of the Selborne Hall had now been repaired (following damage by enemy action). The Club’s first function was a combined Dance and Whist Drive attended by over 200. By this time the late Bert Plumb’s son, Harry, had returned from the forces and was preparing to take over “The Cherry Tree” and also a keen interest in Selborne’s affairs. In 1947 the membership had risen to 85 Playing and 72 Honorary.

A Piebald Pony was allowed by Harry Plumb to graze in the paddock adjoining the green, and left this enclosure late one evening to spend an enjoyable time on the green causing much damage thereby. In memory of this an epic poem was composed by member Bob Shorter and set to music by member George Holley. This formed the Club theme song at the Annual Dinner and indeed for many Dinners afterwards.

THE PIEBALD PONY ON THE BOWLING GREEN

(This was sung to the tune “Horsey-Horsey” with suitable da-da-dahs between each verse.)

It was announced at the A.G.M. that Playing membership had reached the high level of 95 (applications in hand would bring the figure over the limit of 100). Honorary members stood at 70 plus. The membership figure reached a peak in 1956 for there were two vacancies only with a waiting list of five.

After lengthy correspondence and interviews the Brewers, Messrs. Taylor, Walker, agreed to plans for work to proceed on the Club Verandah and Bar. These plans came to fruition in May 1957 and a grand “opening” took place attended by a large gathering of members and friends.
“BING” concludes his account

‘In retrospect it will be seen how much is owing to the Founders and older members, present and past, for their determination to place Selborne on the map, their efforts to hold the Club together during two world wars, and the constant endeavour to provide members and friends with that spirit of friendship and hospitality which makes the fellowship of bowls a source of admiration in the many fields of sport.

Lastly, and this should be a fitting conclusion, let us never forget the great debt we owe to Founder Bert Plumb, one of the outstanding “characters” in the bowling world, a friend to all-especially to the Selborne Bowling Club. When Selbornians take part this Jubilee year in the Plumb Memorial Trophy perhaps they will give an added thought to the memory of “Mine Host Bert”.’